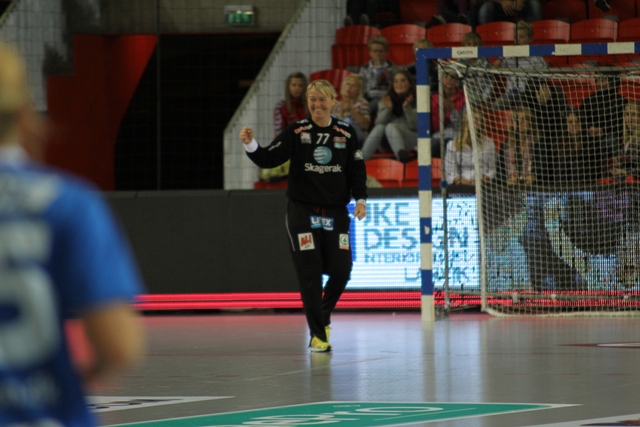 Randers that won the first match in Champions League against Valcea last weekend had no chance to match the hometeam Larvik in Saturdays match who was played in Arena Larvik.

Already from the start it was clear where the two points where going to end. And, when we got to the half break it was already decided. Larvik HK was in a lead 18-8 and had started to put the brakes on.

– We had decided to go hard from start and give them all we had, and it succeeded, Larvik HK coach Karl Erik Bøhn could tell Timout Magazine right after the match ended.

Larvik HK has more starplayers than any other European clubs this season and are one of the favorites to win the Champions League trophy.

Cecilie Leganger is one of the players Lrvik HK signed before this season, and at Saturday she again gave value for the money. With one after the other incredible save she was one of the big reasons why Larvik HK won the match with fourteen goals.

– Fantastic! She plays like a wall in the goal, was Karl Erik Bøhn’s comment to Cecilie Leganger’s effort.

Jan Leslie: We have to focus on being number two

Randers headcoach, Jan Leslie, could just admit that they had no chance to beat Larvik and they had to move their focus to the next match.

– Larvik is going to be number one in this group, and we have to focus on being number two in this group, Jan Leslie admitted to Timeout Magazine after the big loss in Arena Larvik.

Even if it was a big difference between the two teams Saturday, Jan Leslie promised to give Larvik a real fight when coming to Denmark.

– It’s different to play home and away and the difference should not be as big as today when Larvik come to Randers, the danish coach could promise.

If Randers would like to get closer to Larvik they have to focus on the goalmachine Heidi Løke. The norwegian pivot signed ten goals Saturday.
And, this is not abnormal for Heidi Løke. In the norweigan top league she has an average of ten goals during the five first played matches.

Final 4 back in Cologne already next year
Karl Erik Bøhn: If we play our best, we will win against Valcea