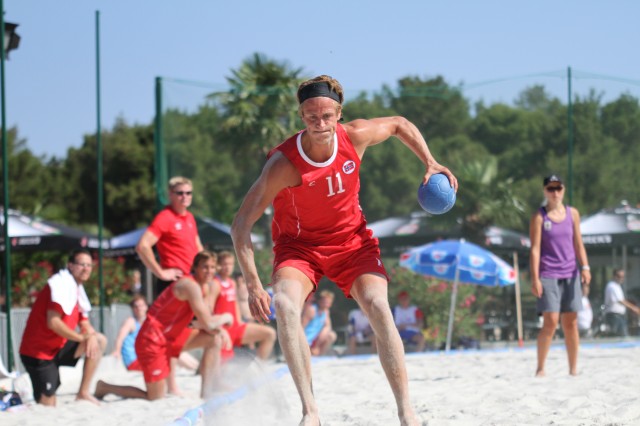 After the Norwegian ladies won in a tight game against Hungary, the Scandinavian fiesta continued and Kjetil Lundeberg´s men team defeated Serbia in the first round match.

Despite the Serbian women´s team in the stands it was not enough motivation for their men counterparts, so a highly energetic Norwegian team clearly brought home the first set. The Scandinavians scored nicely from the wing positions and stood well in defence.

In the second set the Serbians gave their very best, controlled their game plan much better, their goalkeeper Luka Marinovic improved and a tight game developed with the lead changing hand several times.

In a tight finish Serbia went for a shoot-out against Norway, where the Scandinavians showed their mental strength and won their opener.

Edwin Fjeldtwidt: “Every starter is a tough challenge, we had an amazing start, but in the second set we didn´t use our chances, we should have had lot more patience. About the shoot-out, in the beginning of a tournament it´s always nice to practice it, so at the end I feel happy about the victory and the shoot-out.”

Luka Marinovic: “For us it´s a tough tournament, we have won bronze in Cadiz a few years ago and didn´t perform since then in the ECh´s and the WCh. Everyone expects good results from us, but we´ll go step by step.”