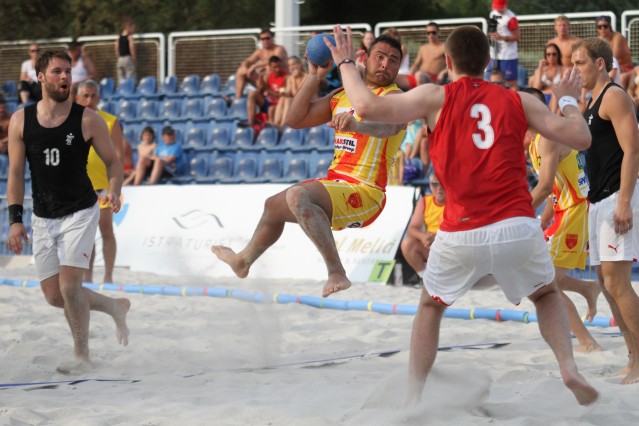 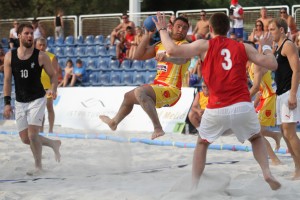 With an improved performance in the second set and by winning the shoot-out, Lars Moeller´s team celebrates another victory in their respective group.

High level performance by both teams meant an exciting game between the two nations. FYR Macedonia was supported in the stands by Croatian Lino Cervar, the national team coach of the Macedonian indoor team. Loyal Macedonian supporters cheered loudly and the team thanked for the support with marvelous attacks and nice goals.

Denmark, who were very strong against Switzerland in their opener, couldn´t cope with the strong first set performance of the East Europeans and even Hans Lindberg, their superstar from Hamburg couldn´t turn the game, so FYR Macedonia won the first set after a tight game.

The Danes looked shocked after having lost the first set in the tournament, so the Macedonians made a storming start in the second set and took a 6-0 lead. However the Scandinavians showed great fighting spirit and after five minutes they turned the match, so an open game on eye level has been established with Denmark having the better end and winning the second set.

Another shoot-out decided about the winner and here, the mentally strong Danish players were the luckier side and won their second match having good chances for qualification to the next stage.

Simon Radoor Sörensen, player of Denmark: “We didn´t know anything about our opponent, have never seen them before, so it was a brand new experience. We weren´t aware of their playmaker who produced a quality game. After two victories we now aim for Top4 and with this direct qualification for the World Championships.

Saso Srbinoski, coach of Macedonia: “We have tried our best, but we lack of experience and training. Our goal is to finish in the middle of the tournament.”