First victory of the title defender 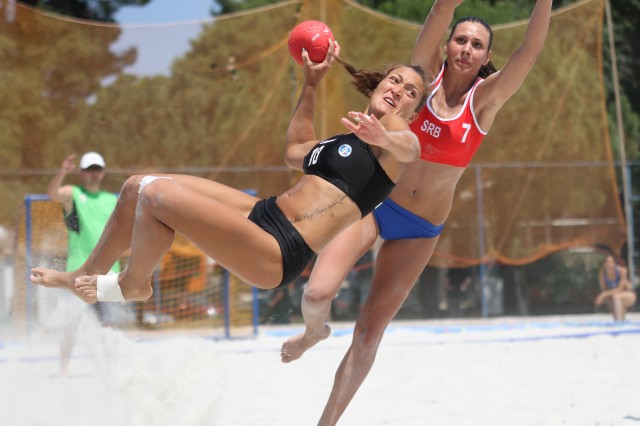 First victory of the title defender

After having lost their debut game in the European Beach Handball Championship against Spain, Italy´s women gave their best and collected their first two points in Umag.

Backed by nice tunes from the speakers a real beach handball atmosphere came up on the court and the South Europeans proved why they belong to the elite of the tournament.

With fast paced handball and quick game plan they scored beautiful goals from every possible position, Serbia had no chance in any of the sets.

However Tamás Neukum´s team showed some little errors in the defence but as the tournament has just started, so they still can improve on the way to defend their title from two years ago.

For the Serbian ladies it was the second defeat, so they have to bring better performance if they want to get to the next round.

Tamás Neukum, coach Italy: “We had a tough start in the tournament and lost against Spain, now we defeated Serbia, but I´m not really pleased with our performance. We only had a little preparation time and my goalkeeper, who was nominated as the best keeper in the last championships, is totally underperforming. I hope that we can improve our game for the next days, our aim is Top4 with the goal to go as far as possible.”

Elena Gjorgjijevska: “We´re here the first time ever and Italy is just superior compared to us. We think we´ll develop from game to game and hope to enter the next stage of the Championship.”