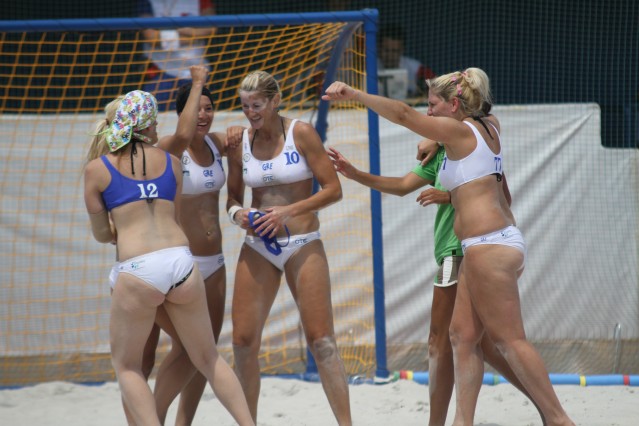 Big surprise on the Main Court in Umag: the ladies team of Greece have beaten Norway in a tight game after shoot-out.

The Norwegians were forced the second time into shoot-out in the tournament, but this time they were not as lucky as against Hungary. Despite dominating the first set, the South Europeans gathered well for the second set and the Norwegians lost their rhythm.

The Greeks who were highly motivated in the second set, gave their best and won their first game in the tournament after having lost against Cyprus in the opener.

Maria Karantoni, coach of Greece: “We were very tired in our first game, as we arrived yesterday after an 18 hour travel. We are a team that doesn´t get much support, so we have paid most of our expenses on our own. Here in Umag, we didn´t set any targets, we go game by game and try to win as many matches as possible.”

Gina Lorentsen, player of Norway: “I feel disappointed, as we like to win games and not to lose. However we´ll quickly forget this match… We´ve no more matches today, but three are coming up tomorrow, and in those we´ll give our best and go for victory.”