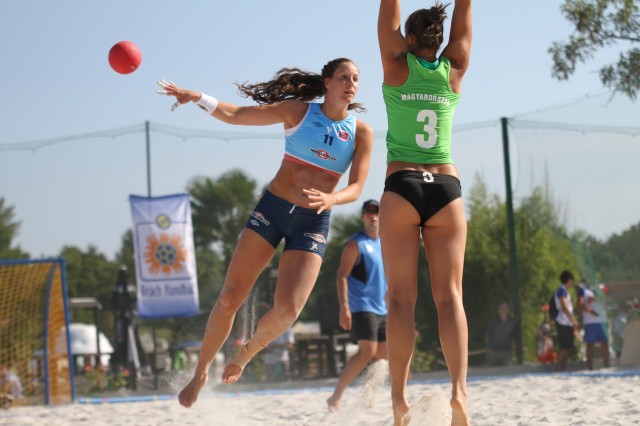 Last year´s World Champions Norway arrived without their CL gold medallist Linn Jørum Sulland, but despite this the Norwegians have hoped for great results in this year´s European Beach Handball Championship in Umag, Croatia.

Hungary backed by some of their gifted youngsters who won the YEBHC prior to this event had a storming start due to beautiful goals by Kitti Gróz and Emese Tóth. Dunaferr´s goalkeeper Ágnes Győri saved marvelously in Hungary´s goal and despite nice attacking plan of Norway, Hungary won the first set by 20-18.

Norway went for a goalkeeper change in the second set, but in the beginning it looked like the Hungarians would have an easy second set.

The Scandinavians gave all out and turned the game thanks to a highly energetic Betina Riegelhuth who was a real leader for her side.

Both supporter groups cheered loudly for their national teams and a face-to-face set developed, where Norway finished luckier and won by 17-16, so the first shoot-out of the Championship happened, where it was again the Norwegians who had the luckier hand and brought home their first victory against a strong Hungarian team.

Betina Riegelhuth: “We had a very slow start and lost clearly the first set, but then with cheering and team spirit we turned the match and won in shoot-out. It´s a lovely feeling with a start like this.”

Emese Tóth, Hungary: “We were clearly winning the first set, but we should have concentrated more in the second… Our aim is to finish among the best five in the tournament, so we will try to win our upcoming games.”