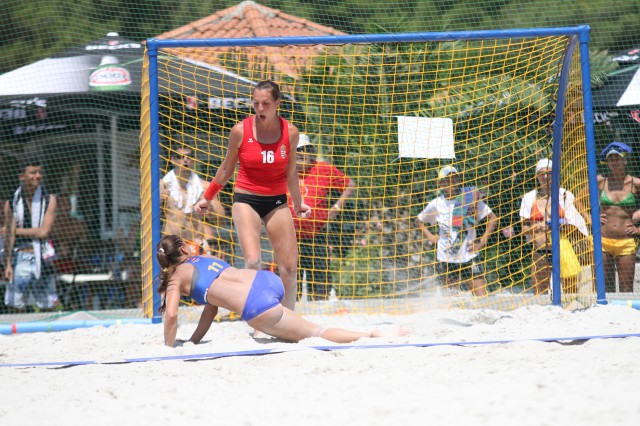 In the tightest possible match of the tournament so far, Hungary turn the match against Spain and win the clash in shoot-out.

The first period didn´t go as good for Hungary as their coach József Farkas would have expected previously, as the Spaniards motivated after their unlucky defeat in the morning against Norway, gave their very best and decided the first half for themselves.

Hungary, supported by several spectators did an amazing catch-up phase, but at the end it was not enough to win the first set.

In the second period Spain were leading for most of the time, but the Hungarians gave all-out and secured a golden goal situation which they luckily won, so a shoot-out decided about the winner.

In the shoot-out it was their fantastic goalkeeper Àgnes Györi who saved marvelously between the sticks and so Hungary celebrated victory and will meet Italy -coached by Hungarian Tamás Neukum- in the Quarterfinals.

Spain will have to eliminate the home team of Croatia if they want to reach the semi-final.

Àgnes Györi, player of Hungary: “It is a marvelous feeling to play in front of so many Hungarians. Despite tiredness, I saw that we were becoming today a real unit, we supported each other very well.”

See all results from EBHC 2011 Womens group 2 – main round