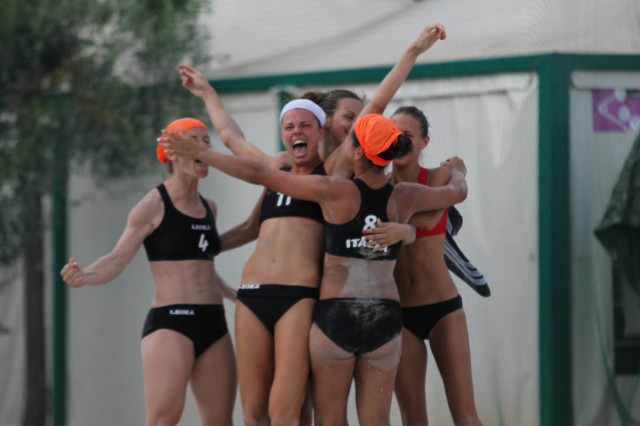 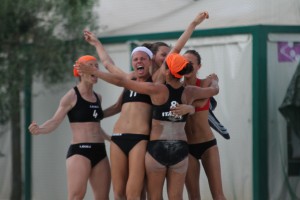 After a nail biting thriller the Italian women defeated Hungary in shoot-out and booked their place in the semi-final.

It was a tough game for born Hungarian Tamás Neukum, as he´s coaching since years the Italian national team. Now he has met his native country that he has coached several years ago.

In the first set it was the Hungarians who had the lead on their side, highly concentrated and motivated they punished every error on the Italian side that had several problems in the defensive positions. Nevertheless the Italians showed excellent fighting spirit and started a catch-up phase, turned the match, but the Hungarians had the better end in the first phase and won it with a close finish (19-18)

Italy´s Carolina Balsanti presented herself in top form and with her effective scoring the Italians brought home the second period, so a shoot-out had to decide about the winner.

The excitement has grown to the maximum among the plenty of spectators and the players, Italy remained more calm, so they´ll play te sem-final, whilst Hungary will continue in the placement matches for 5 to 8 positions.

Sabrina Porini, player of Italy: “We had some problems in defence in the first half, but for the second set we have changed our defensive system and it became much more effective. The shoot-out is always a win or lose situation, luckily our coach Tamás did know how the Hungarian players shoot, so he has whispered me something in my ears before the important throw that I saved and which meant victory for us.”