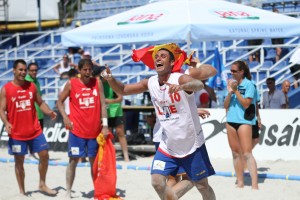 Spain won the men’s bronze medal, in a tense and thrilling match with the eastern Europeans from Ukrain.

As expected it was a tough battle between the two teams, both wished to get a medal at the tournament´s end, so they didn´t spare their reserves, they gave their very best from the beginning. Spectacular goals were followed by nice assists and both goalkeepers made beautiful saves.

Spain were the team who took the lead, but as it was only minor margin between the two national teams, the game was on eye level for the whole set with Spain securing a close victory.

In the second set Ukraine went all-out, started their top gear and were in clear lead for a while, but Spain started a catch-up phase and came as close as possible.

However Ukraine remained concentrated and took the second period, and the game to a shoot-out, the Spaniards going on to win in a dramatic finish.

Rodriguez Cruzado, player of Spain: “We´re happy about this victory, as Spain haven´t won a medal since five years in the championships.”