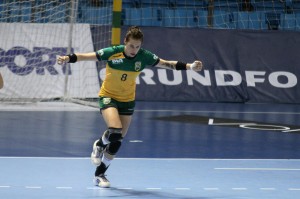 Brazil turned a match again after being down by several goals, coach Morten Soubak´s team has celebrated victory against Croatia and will face Russia for the 5th place game.

Croatia looked stronger and more motivated in the first half, Brazil lacked the enthusiasm of the previous matches and so it were the east-Europeans who had the better start, Andrea Penezic played her best game in the tournament and was one of the main pilars for Croatia´s clear lead.

Brazil only woke up after about 20 minutes and with six goals by Hypo players the Brazilians came as close as one goal to half-time.

The Croats came more determined from the cabins and took the initiative again and established a four goals lead.

Brazil started a catch-up phase and made the equalizer 10 minutes before the end. Then, the time has come for the supporters to cheer as loud as possible for the hosts, this gave a big boost to the locals and Dani Piedade and co. went in lead by three goals.

The Croats were able to level the match, but Brazil has scored in the dying seconds and won the match.

Russia beats Angola and plays for 5th place.
France is the first finalist of the WCH!