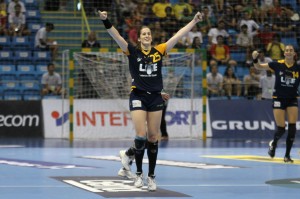 The Spaniards deservedly celebrated big time the bronze medal, as coach Jorge Duenas´ team clearly defeated Denmark in a game that was only open in the first half.

In the first 30 minutes the teams were on eye level, the lead has changed several times with mostly Denmark being in the front, but Spain leveling.

Both teams have been damaged during the World Championship, Spain looked very tired, whilst Denmark had a bad day.

In the second half individual plays by Macarena Aguilar and Nerea Pena pre-decided the match and also goalkeeper Silvia Navarro contributed much to today´s success.

Danish coach Jan Pytlick chose bad tactics with his 5:1 and 4:2 defense, as with Macarena Aguilar the Spanish side had the best possible playmaker for such situations.

With the dying minutes approaching, Denmark lost several balls and Spain was able to extend its lead.

The 7th place goes to Croatia
Norway are World Champions!