Among spectators we could observe three Győr players, Orsolya Vérten, Heidi Løke and Katrine Lunde Haraldsen relaxing after CL-final played the day before.
Before the match in the totally out-sold venue was hold a minute of silence in memory of the Norwegian swimmer, Aleksander Dale Oen, tragically died last week.

The Danish team started well and despite the burning athmosphere created by the Hungarian crowd they managed to build up a three goals lead, 2-5 in the 9.minute of the final. After coach Gabor Elek took his time-out, his team seemed to be more focused and tried to come back in the match. Danishs had a 3-8 gap in their favour, but FTC players scored more goals from 9 m, from the line-player and right wing position also by Zacsik, Kovacsicz or Tomori, and after 20 minutes of play, the result was 10-10. Hungarians defence became much stronger, they managed to stop Viborgs attacks well, so after beeing lead by five on home-court FTC had a two goals advantage to the break, 14-12. 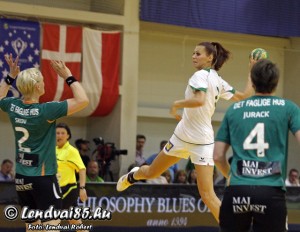 Second half of the match brought a very hard fight with Hungarians in lead all the time and Viborg trying to come closer. Topscorer for Viborg was Rikke Skov, who reached a number of 9 goals in this match. FTC had the chance to win this home-match by 4-5 goals, because in the second part they played a smart handball, defenced well, scored without fail from penalties by Serbian Jelena Zivkovic, and they had fast counter attacks also. But they have got extremely tired in the end and Viborg with a larger squad reduced the difference to only one goal in the finish and can prepare for the second leg of the final with a bigger chance and the mentally advantage given by the home-court. Final result: 31-30.

Zita Szucsanszki, captain and playmaker in FTC, analyzed the match: 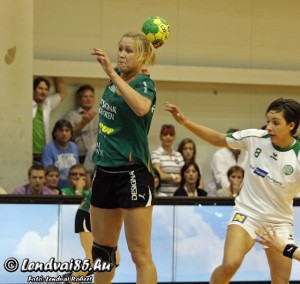 “We were not focused enough in the start of the game, but when our defence became stronger we managed to come back and take the lead. I am very disappointed because of the last part of the match when we did a lot of mistakes and we lost the 5 goals advantage we have got earlier. Truth is that we don’t have such a numerous squad, that’s why we got tired to the end of the match. Now we have to travel to Denmark with only one small goal, so we have to play as good as in the first match’s last forty minutes to be able to defend the last year’s CWC trophy.”