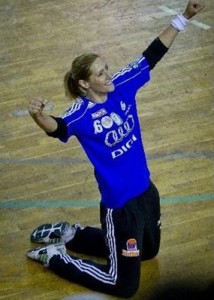 In the second leg of Hungarian League’s final met two of this years European Cup finalists! On Wednesday in Budapest the CWC winner FTC Rail-Cargo Hungaria and CL-finalist Győri Audi ETO KC had to decide the Hungarian Champion. If FTC could win,  the first place would be decided on a third match.

Szucsánszki and company had a big psichological advantage on their side, after winning  Viborg and taking the CWC, plus home-court advantage too, meanwhile the team from Győr was totally down after losing the CL-final in Podgorica.

The match was an exciting one, where two tired teams had a decent fight and they wanted to show a spectacular handball to their enthusiastic fans also.

The result was tie  or very close, almost all the time in the second part of the game, and half minute before the end we already had a winner, score was 27-28 for Győr. But Szucsánszki got a penalty and Serbian Jelena Zivkovic had the chance to put the ball behind Pálinger,  when the playing time has already expired. In case of a tie, 7m penalties would have been decided the winner.

Pálinger saved the ball, which was her last save  in a very succesfull carreer, giving the ninth Hungarian Championship title to her team.