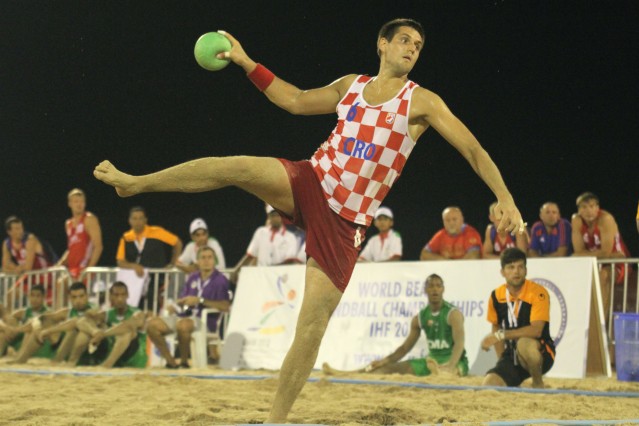 These days, the Hotel Millennium Resort in Al Mussanah in Oman is welcoming the elite of men and women beach handball teams. The World Championship will kick off on the coming Sunday (8 July) and before that date some teams are practicing already in test tournaments.

Today (4 July) on two courts a test tournament has been started with European Champions Croatia facing the number one team Egypt from the African continent.

Both teams were struggling in heat in that early evening match and the favored Europeans were the one that controlled the match after a 2:2 beginning in a slow paced start.

With three straight two-pointers the Croats moved on to 8:2 and so the first period has been quickly decided with Egypt having no answer to the motivated Europeans who were cheered by their female country mates.

Africa´s champions Egypt showed their strength in an equal second period, where the Africans were continuously two points ahead, but in the decisive seconds Croatia asked for a time out and scored two points turning the match with the final whistle in their favor.