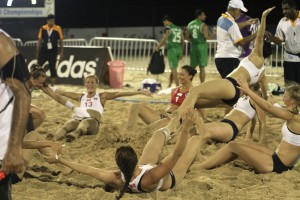 A stunning fight for the dying seconds in every period mean a nail-biting thriller for the teams and the spectators in the crowded court number three in Al Mussanah.

The two teams have played the first match the test tournament a few days before and in the final here both showed a powerful performance in this tight clash.

It was a close first period with Norway being ahead by two-four goals. The Scandinavian dominance and quick game plan resulted in a six points lead (22:16), Croatia came closer towards the dying seconds, but Norway brought home the first set.

In the second half it were again the Norwegians with a better start, but Croatia, the recent European Champions fought back hard and equaled in the last minute.

With ten seconds to go the scoreboard showed a 14:14 draw, when Croatia called a time out. With a last second goal, the east europeans won the second period, so the final outcome had to be decided by shoot-out.

There Norway got the better nerves forcing the Croatian goalkeeper to score twice from her own position, she failed, so title holder Norway earned gold at the test tournament.