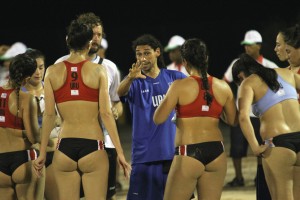 Italy that arrived to Oman without any real preparation is hoping to collect form in the test matches before the main event starts and a game against Uruguay was a great challenge for this goal.

Preparing together with Brazil gave the South Americans a great boost, so their performance level rose a lot and the Uruguay players showed this in the match against Italy.

The South Americans set a storming start and marched on with 4:0, but the Italians replied with a 7:0 run turning the result within minutes.

A time out call on the Uruguay side quickly brought results and so with an enthusiastic performance the South Americans brought home the first period.

Last year´s European bronze medallist got its act together for the second period and replied with an improved performance for the first minutes onwards and gave no chance to the South Americans.

A shoot-out had to decide between the two equal teams and there Uruguay were the luckier team and celebrated great success in this top notch duel.