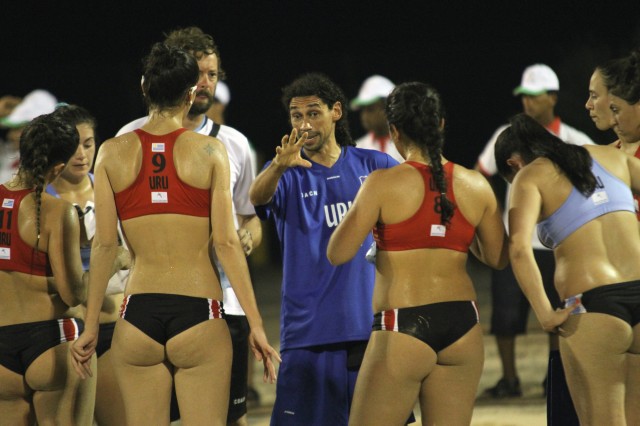 Today the WBHC 2012 begins and we’ve been looking at all the teams for you. Here are our opinions:

1. BRASIL
Defending world champions. The climate and all the matching Brazil have at home during the year makes them favorite again. The Brazilian Federation used money to send the coach, Antônio H. Guerra Peixe, to last years EBHC 2011 in Umag where he gathered more information on the European players and teams.

2. RUSSIA
Russia usually have some big players with good reach in defense, and last year in the EBHC in Umag we even noticed some good players in attack. We need to go all the

way back to 2004 where Russia got the bronze.

3. UKRAINE
The only team who has missed the opening ceremony, as the Ukrainians will arrive on match day in Oman due to financial restrictions in their budget. They have got a good team that last year improved their game plan match-by-match, the same is expected from them in this tournament.

4. OMAN
The host nation, that earlier had the Danish coach, Gorm Andersen, did not reach up among the best in Turkey two years ago. We don’t think they’re going to make it this year either.

5. BAHRAIN
Bahrain got number two in Asia games with Qatar on the first place. It’s a tough group where it’s going to be hard to get points against teams like Brasil, Russia and Ukraine. With top performance we think Bahrain could be this groups representative in the final stage.

6. AUSTRALIA
We got to know this team in Turkey, and they should have improved a lot if they’re going to take any points in Oman. They’re working hard at home to get the sport to grow and get a growing interest. We think Australia are a team for the future, and it may surprise us and the other teams in the championship.

1. CROATIA
European champions 2011, and should be able to compete for the gold if they play like they did last year in Umag. They won the test event in Al Mussanah and we’d not be surprised if this team is top 3 at the end of the tournament.

2. EGYPT
They don’t belong to the best teams in beach handball, but at the test event they have showed improving form, still there are stronger teams than them in the group and at the championship.

3. SPAIN
Got their latest medal in 2006, a bronze in Rio de Janeiro, and have not achieved to get in the top 3. Spain are surely one of the candidates to take medal in Oman.

4. QATAR
Qatar did a 10-days preparation in Phuket in Thailand, where they have played several test matches against Thailand. They have won the Asian games and reached third place in the test event in Oman.

5. URUGUAY
The South Americans are more like outsiders in the tournament, all attention is on their South American partner Brazil who are the title defenders.

6. KUWAIT
Kuwait is number three in Asia, with Qatar and the host Oman as top two. Kuwait showed weakness against Australia where they lost one period at the test event. We don’t think this team will make it in this championship.

1. CROATIA
European Champions 2011, and after seeing them in the test tournament they might top this with a medal in this championship.

2. DENMARK
Silver medalist in Turkey two years ago. One of the favorites to go all the way to the top again. Got 3rd place in EBHC 2011 and got key players with a lot of experience from handball, both indoor handball and beach handball, in the squad.

4. CHINA
China did good in Asia Games. It’s hard to say how they will manage in Oman. Maybe this years surprise, even we think they will have a hard time gettting all the way to the top.

5. URUGUAY
Have the same style as Brazil and could be a surprise if they play at their best. They have trained with Brazil for weeks and showed a quality performance at the test event in Oman reaching third place.

6. AUSTRALIA
Qualified for their first championship ever. We don’t expect this team to advance in the tournament.

1. NORWAY
Defending champions, disappointed in last years EBHC 2011 in Umag, but won the test tournament in Oman against European Champions Croatia before the championship starts today. This team could take gold again this year!

2. BRAZIL
Since they won the World Championship in 2006 on their home ground, it’s been two third places, 2008 in Cadiz, Spain, and 2010 in Antalya, Turkey. Before this championship they’ve prepared a lot and we do believe this team will be among the top 4 again.

3. HUNGARY
Got something going and we think this team will improve in this championship. Maybe this championship is going to be the one where they will climb to medal place. They willll miss two players, Emese Toth and Kitti Groz, on the first day, they’ll arrive from the Junior European Championship in Georgia.

4. THAILAND
This team ended number four in Asia games. Don’t think this team will be among the teams in the play-off.

5. POLAND
Poland qualified at last year’s European Championship in Umag where they played a solid performance. Last night in a test game they played a close match with Denmark and a lot will depend on their debut match against Hungary.

6. SINGAPORE
Singapore didn’t participate in Asian Games and did not participate in the World Championship two years ago. Not so much info about this team, and we conclude with that this means that they can’t be amon the top teams.