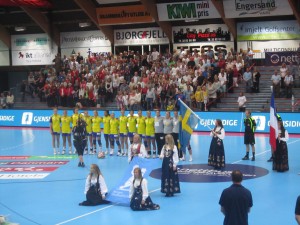 Nettbus Scandinavian Opens first clash is between Sweden-France, in Drammenshallen.
From Swedish team Matilda Boson is playing her 200th match in the national team and Ulrika Agren is celebrating her 25th birthday today.
French playmaker, Allison Pineau makes her comeback on  the court after her knee injury in December last year , in Sao Paolo.

First half was an equal fight between the two teams. Almost the hole game was a tie, but after 8-8 France took the lead with a better attack. This part of the game was also the match of goalkeepers, Cecilie Grubbstrom and Amandine Leynaud showing a very high class play. Half time result: 10-13. 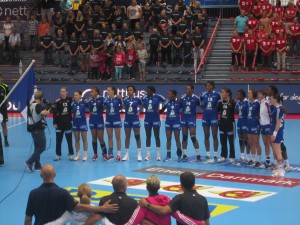 In the second part of the game it was a clear French lead from the start to the last minute. Olivier Krumbholz gave playing time to all of his players, we could see Mendy as line-player, Darleux in the goal was at high level. France was better in every formation as Sweden in this preparation match before the OG.