Denmark back in track

Denmark back in track

On the second day of Nettbus Scandinavian Open handball fans can enjoy first the match Denmark-France. Les Bleus are coming with a lot of confidence after yesterdays match when they managed to beat Sweden with a quiet big difference.
Danes have to think little bit different today, to forget the first match against Norway, the big difference and the hopeless play they have showed, and set a fresh start today against the French team.French team is playing without Mariama Signate and Amandine Leynaud. 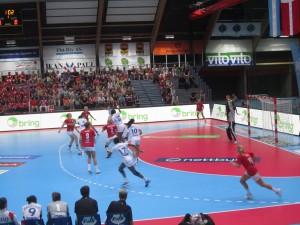 Darleux in the goal has several sves but her teammates could not score on the other side of the court.Danish left winger Norgaard refind herself after first matches bad performance and scored from the wing, counter attack and penalties also. Half result:13-7.

Second half: after 15 minutes play, Denmark is still in lead, 19-13. It looks like that the girls of Jan Pylick managed to get over the match against Norway from yesterday. France had a debutant today in goalkeeper Pierson, who had a good performance, but that was the only positiv thing France could show today. Final result: 22-19.
Best players of the match: Karin Mortensen(Denmark) and Camille Ayglon (France)

Norway was invincible
Scandinavian battle was won by home team