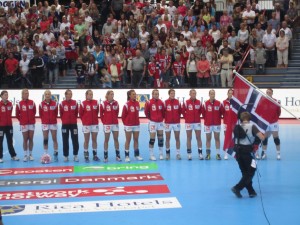 Tonight’s match between Norway and France could be called the final of this tournament and it is also a replay of the WCh- final.
Norwegian goalkeeper, Katrine Lunde Haraldsen is out with a small injury and she will be replaced with Silje Solberg for this match. Linn Jörum Sulland is celebrating her birthday today.

France’s team is prepared to play a tough handball match against Norway. ” This is only a preparation match to us, but we will try to do better than yesterday against Denmark and show a quality handball. The important match will be played in the first group-match in OG.”-said Olivier Krumbholz today.
French Camille Ayglon is not in the team, today she got a pause from the coach-team.
Both Norway and France are favourites to win the Olimpic title in London, so definitelly this is the most exciting game of the Nettbus Scandinavian Open and a very good opportunity for both, to practice against a strong team. Thorir Hergeirrson and Olivier Krumbholz will play their own match today, by showing and hiding the weaknesses or strognesses of their teams.
First match in groupes in London will be played also by these two teams! 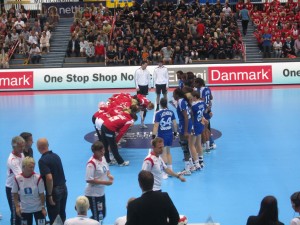 First part of the match was an exciting play, where Norway managed to get a five goals gap at 8-3, halftime played. Coach Krumbholz took his time-out and his team made an extraordinary come-back, got a tie at 11-11 and went to break with 11-12, after Baudauin scored from her third penaltie today.

Second half brought a slight French advantage, 13-16 in 38.min.Thid time was Thorir Hergeirsson’s turn to take a time-out. Norway managed to equalise at 17-17, and got a lead, 22-18 , nine minutes before the end of the game. Norwegians got en extra speed on their play, so the lead increased considerable til the end. Final result: 28-20.