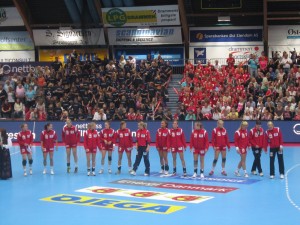 The succesfull player decided to stop after tne olympic gold in London and will concentrate mostly for Larvik HK and prepare herself for her private life.

“Is the best time to stop now, with the olympic gold from London around my neck. A wonderful epoque is over now,  and I have to think about my life after handball too. I would like to concentrate fully on Larvik and start to work beside that. My decision is the final one.”- said Johansen .