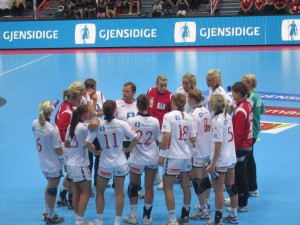 Thorir Heirgersson and Mia Högdal Hermansson announced their team to GF Forskifring Golden League in Denmark. The team is not complete, more players are injured or seek in this period.

Team captain Marit Malm Frafjord took a break from national team, because of a busy season. Tonje Nøstvold and Linn J.Sulland has injuries, but they will probaably recover until ECh in Serbia. Ida Alstad had got a flue, Camilla Herrem is suffering of a viral seeknes. Gøril Snorroegen is taking a break because of injury, and her possilble replacement,Ida Bjørndalen from KIF Vejen has been also injured during trainings. Unfortunatelly the national team of Norway has to participate on this tournament with a very small squad.