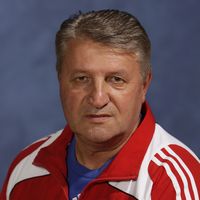 Trefilov-era in Russian handball it seems to be over when another Russian coach takes over the Russian national team. The coach has already leaded the Russians last weekend in Golden League tournament in Denmark, but then his position was only interimar.

From today Vitaly Krokhin is named officially by the Russian Handball Federation as coach of the national team of Russia.

Krokhin has worked earlier as assistant coach with Evgeny Trefilov at national team, in the period when Russia has won twice WCh gold and an olympic silver. He had  worked at  Kuban Krasnodar and Lada Togliatti as well.

With Krokhin on the bench,  Russia ended on the second place of the Golden League tournament in Aarhus.

His assistant coach will be Anatoly Skorobogatov , who was the coach of the U20 team of Russia and they worked together earlier.

Load More... Follow on Instagram
Oltchim saved from economic collaps
Torbjorn Klingvall is taking over after Per Johansson