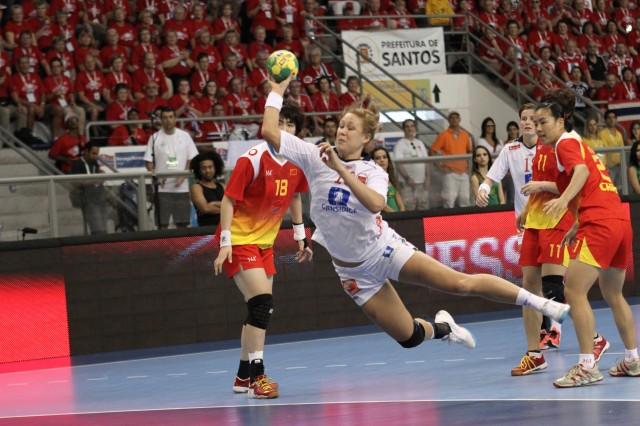 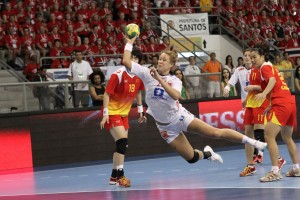 Viborg had to take farwell from the great Grit Jurack, and has also injury-problems (Amanda Kurtovic and Marit Malm Frafjord has shoulder injuries both and are out), but they signed Hungarian backplayer, Anita Bulath in the last minute.

Herbert Müller’s team started well thematch and was almost all the time of the first half in lead. They showed a good defence, strong goalkeeper performance and fast attacks, when Kerstin Wohlbold, Lidija Jakubisova, Petra Popluharova or Mie Augustesen has scored. Danes had a weak defence and attack, only Maria Fisker had some good moments on left wing. Half time ended: 18-14.

Second half started with some Danish scorings signed by Bulath and Gulldén(19-17), and Viborg managed to equalise the situation, 20-20. Germans were fighting hard and increased the gap again, 22-20, 25-22, scorings by Nadgornaja, Althaus, Popluharova. Viborg was actually playing without a real-line player, and this fact was really visible in this periode of the game. After 43 minutes score was 27-22 and the German team didn’t allowed to Danes to come much closer, 32-28, 53.p.    Amazing home fans encouraged their team and Thüringer won their first CL-match, getting two amazing points against a vulnerable Viborg. Final result: 34-30.

Other match of the group was played by Buducnost Podgorica and Zvezda Zvenigorod. CL-tiltle defenders has a completeley different team from last season, but with an outstanding Clara Woltering in the goal they managed to collect the important two points on home soil against a Russian team, which made too many mistakes , specially in attack.

Right back, Elena Gjorgievska from Buducnost has been seriously injured, she needs an ankle operation and recovery will take 2-3months.