The outstanding team of Győr collected its fifth victory

The outstanding team of Győr collected its fifth victory

The Hungarian team did not want to relax and they sent a message to their opponents, earlier this week through television: “We are not going on holiday to Croatia. Tremble Koprivnica!”.

The home team suffered a  big loss last week against “U” Jolidon,when Miranda Tatari, the captain and playmaker of the team had been injured, thorned her knee-ligement, and she has to be operated, but wanted to take a seat on the bench, in this match, to help and encourage her teammates.

Győr has taken the lead in the very first minute of the match, and never let hapen that hosts taking it back. It was tight in the fist part of the match, 0-2, 4-4, 5-6, 7-8.  Andrea lekic had a good day at work and Sanja Damjanovic showed a good performance as well. Győr had problems to score from 7 meter, Görbicz missed two penalties. Then guests has accelerated and increased their advantage, 8-12, 9-13, half time result beeing 11-14.

In the second part the Hungarian team has taken a flying start, leading by 12-18, scorings of Lekic, Kovacsics and Löke made this advantage. The biggest difference was at 19-28 and 20-29,Győr defeating Podravka Koprivnivca on their home  court by 22-29. 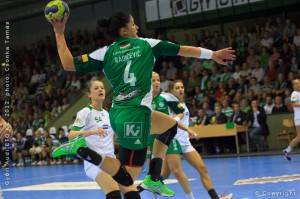 The defeat of Podravka means that next week they will play a decisive match against Krim Mercator (Slovenians got a victory against Cluj in Romania) for qualification to the Main Round.

In the other match of the group, played in Cluj Napoca, Romania, Krim Mercator from Slovenia defeated the hosts. “U” Jolidon Cluj, keeping open -this way- there chances to qualify to the Main Round.