Győr waiting for new opponents, Cluj out from Europe 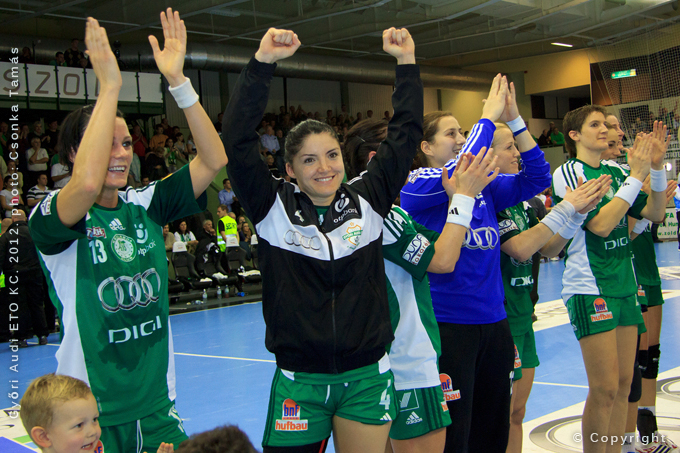 Győr waiting for new opponents, Cluj out from Europe

Last round of group stage in CL started in Hungary, Győr, where “U” Jolidon Cluj were the guests this time. Last match of these teams  could only give answers to some “unimportant” questions, like Győr’s sitxth win of a row of six matches in CL or “U” Jolidon will get their first point(s) ever in CL.

Hosts had a complet squad, without injuries, with players willing to win and improve their play, on both ends of the court.

The head-coach of Győri Audi ETO KC, Spanish Ambros Martín talked about his team some days before this match:

” We are already qualified to the Main Round, but we have one more game, against Cluj, on home-court. We are preparing with the same seriousity for this game, like for every other match we played earlier. We would like to improve our play, respecting the opponent and wanting to offer a great handball-experience to our fantastic crowd on home court. I am satisfied with our performance in this first part of the season, and regarding the fact that we could start the preparation with the complete team, only in late august, we have improved a lot. I can say, that we laid the foundation for the next round and time is working for us!” 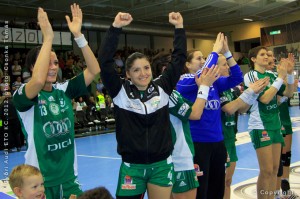 “U” Jolidon Cluj has arrived to Győr without any points, and knowing that their way in CL will finish in Magvassy Mihály hall this year. Anyway, the team from Transylvania realised a great thing, representing Romania as a second team in the groups of CL,  the country having two teams in the best 16 for the first time.

First part of the match has brought a balanced fight  without any bid. Despite this, the match was balanced, the home team took the lead, 2-0, 4-2. The guests made a fast come back, 5-5 after 8 minutes. But home team has accelerated and took back the lead by 12-7 after 15 minutes. Than Cluj reduced the gap, playing a good handball, and the result before the break was 17-14.

In the second half the home crowd could see a tight match, but in the last part of it the home-team increased the gap, delighting the white-green crowd with a ten goals difference. We shoul also mentione that every player of Győr has scored at least one goal, the young left wing, Dorina Korsós having added her ever first goal in CL. Final score: 37-26.