Vérten: the only acceptable result was the victory

Vérten: the only acceptable result was the victory 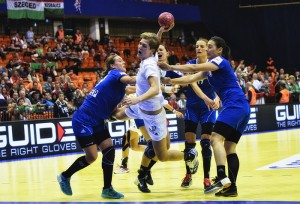 ” I’m very happy, despite the bad start in the game, but I am really proud of the team that we managed the comeback and turn the result. Everybody has fought for every ball, and our defense has worked out very well in accordance with the goalkeeper, and that’s why we could score fast goals.

Before Friday we have to improve a lot, because we got a lot of scorings from counter attack, but right now I am just satisfied, we had a heavy pay-back against Germans and we had to show for ourselves that we can defeat them.

After the defeat from Croatia we were not sad, we were just angry at ourselves, because that match we should have won. We lost because of many silly mistakes, those we could correct today, and all the time we had a player who took the responsability and pushed the team to victory. Anita Görbicz was fantastic, she just held the team together.

I hope that we have started to play for real and from now  we can go towards new victories.”

Orsolya Vérten, the left wing from Hungary has shared their thoughts after the match against Germany:

“It’s a very good feeling to be a part of this team, I am very happy right now and very proud of the hole team.We started this match knowing that the only acceptable result is the victory today, and we did everything to get it. Orsi Herr  was fantastic in the goal, and our field-play has also improved.Everybody has showed an impressive fighting-and team-spirit, which we would like to take to the next match too. Against Spain it will also be a difficult match, but we would like to take with us all the positiv energies we have got here today. For further good results we do need those points against Spain! Crowd was also fantastic, have helped us a lot, big thanks to them.”