Expert Eduarda Amorim about the Main Round, Group II. (5.)

Expert Eduarda Amorim about the Main Round, Group II. (5.)

In our series of articles written by our experts, today’s analysis is made by Eduarda Amorim, about the Group II. of the Main Round.

The Brasilian backplayer, playing for Győri Audi ETO, has  watched the last two matches of group C in SPENS arena from Novi Sad.

Eduarda has an injury she is recovering from, her left ankle has been injured in the last CL-match played for her club, but it goes better now, and about one week she can drop the crutches.

All the matches in this group, were really equilibrated, it was worthy watching.

Spain started very well, showing their superiority and they seemed to be ready to reach easily the” best four” again, but in the last match against Hungary, they played apathetic and  lost control over the match and over  their game.

Then Hungary took bravely the first position of the group. Good job for Görbicz -girls. They haven’t had a good start, but later they showed that posses the necessary spark which can take them further.

Good job also for Croatia,   they managed to play well, even  without their main players. Despite of loosing the advancement to the Main Round in the last minutes, they have fought bravely.

The biggest surprise for me was produced by Germany.

They had performed in a consistent way all three matches and in my opinion it was just some lack of experience to finish better the first two matches. 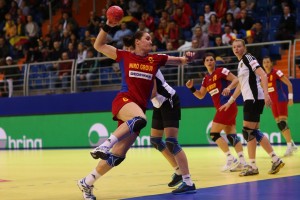 This group became an easy one  to Montenegro. They impressed me with the good performance and consistency of their game, specially in defense, making them the biggest fighters of this quartet.

In the last match, Katarina  Bulatovic and goalkeeper, Sonja Barjaktarovic were responsible to lead  the team, getting the maximum points for the Main Round.

Russia was a disappointment, one more time -for not showing any of organisation in their defense and any pressure in attack.

Romania had also a poor performance, specially when they were up in the score, they couldn’t keep the control and not managing to reach a bigger goal-difference.

Aurelia Bradeanu has performed brilliantly, but Romania as a team- in my opinion-  still didn’t reach a high level in these three matches.

Iceland had a good fighting- spirit and  some good moments as well, during the matches, specially against Romania, but it was not enough to get any points.

Expectations about Group II in Main Round:

I believe  Spain  and Montenegro will get into the best four. Montenegro,  because they are very organized and playing cohesively as a team, and Spain because they had a wake up call in the last match of the group.

During all three matches of the group, the rotation of the players was very important at these two teams, and that can give the the possibility to reach a higher performance and I believe this will give them a spot in the semi finals.

Hungary in the other hand is performing well but they have some bad moments in defense when they become tired, and in the Main Round this can cost them .

I am not expecting any surprise from the other three teams (Germany, Russia, Romania), maybe just from Romania, if they can grow in their performance.

One more time: it will be interesting to watch the next battles and I looking further for it.

Hungary can beat anyone, and Spain on a siesta
Norway saved by Katrine Lunde