Line Jörgensen and Dusan Poloz about the match

Line Jörgensen and Dusan Poloz about the match

After he Danish victory against CzechRepublic, timeoutmag.com has talked with Danish player Line Jörgensen:

” We are very happy for this victory, the two points were extremely important in this match. We had some mistakes but could be satisfied with our play and with the small steps we are making in every match.  Now we have to prepare to the next two matches against Norway and Serbia, especially our defense has not worked out as we planned, so we have a lot of work to do.

The Czechian team is a very tough one, they were surprising here in ECh, they has caused some troubles to all their opponents, getting to the Main Round.” 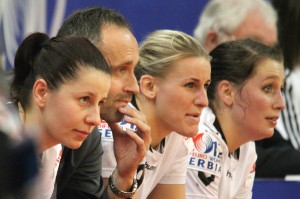 Dusan  Poloz, the assistant coach of Czechians, has also analysed the match:

“We have played a good match, where we could be both satisfied and unsatisfied with our play.

We are in the Main Round, so every new match is an extra bonus to us as a team, but we failed too much today from clear chances.

On the other hand we have played a good match in organised attack, but we had problems with running home and scoring from six meters chances.

We have played a very balanced first half against Danes, and like in our earlier matches we have not given up, have played close match with Norway and Serbia also.

I know quiet well the Scandinavian style and we are prepared how to play against them, and our team is also using a lot of elements of this handball.

We also hope that we can get at least one more victory here in the Main Round.”