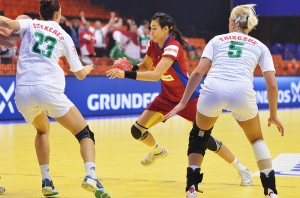 The highly wanted semi-final spot was at stake in this fierce duel between Hungary and Romania.

Despite Hungary´s first goal by youngster Kinga Klvinyi, the Romanian side was the dominating team in the early phase with several counter attack goals by their superior wing players.

Hungary´s line-player Piroska Szamoránsky was marked well in the rock solid Romanian defense, so the red-white-green shirted team had to look for other possibilities to score.

Romania used well the strength of sharpshooter Cristina Neague, who returned after an injury to handball courts last month, whilst on Hungary´s side it was Zita Szucsánszki taking responsibility to shoot and score.

Romania however kept their two-three goals lead and Hungary went on to man-mark Neagu.

With three winger goals by Orsolya Vérten and Mónika Kovacsicz Hungary closed the gap and leveled the match. Romanian coach Gheorghe Tadici was forced to call a time out and implement new plans for his side.

Quick goals by Neagu and Meirosu meant another lead for Romania, but Hungary gave their utmost and with Krisztina Triscsuk´s first goal in the national team jersey Hungary led 12:11 after 27 minutes.

A marvelous Èva Kiss in the Hungarian goal with 37% saving percentage gave good backing to her team-mates and with further goals her side moved on with 14:12 after 30 minutes.

Hungary came highly motivated from the cabins and pushed by their vociferous fans Anita Görbicz and her team-mates rallied on with three goals.

Both teams were aiming for victory and produced an entertaining clash with superb goals, but also with nerves in the shots.

Hungary failed twice on their attacks, this was punished hard by the Romanian counter attack specialists, but Anita Görbicz´s next goal gave another hope for her side, Hungary led by two goals after 45 minutes.

Clever tactics and changes from the bench gave new power to Hungary and so Böhn´s team increased the lead to five goals, Romania were unable to break the massive Hungarian wall and Gheorghe Tadici took his second time out in the match.

Romania tried their attacks with two line-players, but failed on the strong defending Hungarians and goalkeeper Kiss. Coach Tadici was totally speechless after Szucsánszki´s goal to a six goals lead.

Hungary had an easy second period and with this massive victory reached the semi-final and will play on Saturday in the Kombank Arena.

Djokic,Woltering and Heine Jensen about the match
Hungarian and Romanian interviews