Karl Erik Böhn: the bronze meant almost everything to me

Karl Erik Böhn: the bronze meant almost everything to me

Head coach of national team of Hungary, Karl Erik Böhn is spending his winter holiday in Norway. He got some time to tell (write) us in a blog, about his new, amazing experience he had in Serbia, by leading Hungary to the bronze medal.

You can read about the negativ and positive thoughts of a handball coach, during a two weeks championship, telling us about players, staff, bad days and shining moments, struggeling with private problems as well.

“It is the greatest and the funniest I’ve been on as a  trainer! The bronze medal meant almost everything to me,  getting with this the chance to continue working in the Hungarian handball, which I think has a very strong traditions and culture! Experiencing the final tournament of the ECh in Serbia, as I said was the biggest I’ve taken part on!”

About the matches, tactical decisions, players, referees, his technical staff and a coach’s feelings, before,during and after matches:

“I have really believed in the victory against Croatia, but when it started I was a beaten man, changed little, not using the full squad in the game and we were too static in our play, that was my fault! Seems that we were fooled by the fact, that Croatia constantly used the field within 6 meter. Was surprised that this was allowed by the referees in 60 minutes. When Croatia scored the last goal, it felt like we were at the circus! I packed my suitcase when I got back to the hotel after match, to be ready to return to Norway after the loss that I was sure would come against Germany. 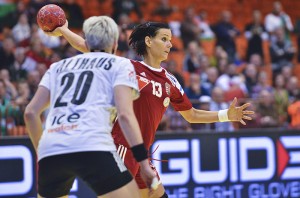 I waited for the match against Germany, lying in the bed the whole day, with negative thoughts, but Andreas (Smeby) and Tord (Ellingsen) were positive! Forced myself up and kept acting on the playr-meeting about having faith in the team and how we would defeat Germany! But  inside me, had basically no faith in victory….Fortunately anyone else than the two Norwegians knew it! Thankfully!

Beeing led by  1-6, I was preparing  me to take farwell to Hungary and the team , but the girls would have  the opposite, they fought back in the match in an unbelievable way, and then I realized that we have a great team,  with big T. This was exclusively the victory of the team!

Then  everything turned! My psyche, and all negative thoughts were gone! I knew that we can beat Spain, just figured it out that would work. We had a tremendous energy in the group / team.

We have just  fantastic staff around the team: Csaba Szikra-Mezey (physiotherapist) and Csaba Timár (masseur) are just amazing, along with doctor Gyula Szikora, they treat  the girls’ bodies, souls and minds all the time, day and night! Only positive and nice people who keep your spirits up and glow all the time!

Istvan Langauff (technical leader) is a treasure, well liked by everyone , he helps me with everything, is the greatest support for me! I had never managed without him!

Bea (Siti) is like an H.C Andersen fairy tale! She is so wise and clever that it is difficult to believe that it’s true! And obviously she is too modest, but without a doubt the very best I could have at my side! Her values could be measured only in gold!

Against Montenegro Anita Görbicz was sick and the opponent treated Tomori very ugly and provoked her all the time. Giving  a red card to her,  I think was totally unreasonable. I could understand very well her reaction and fully supported her . The way they coped in the defense, hitting the face  of Tomi and the fault against Kinga (Klivinyi), IT do not have anything to do with HANDBALL.

We were aware that we could decide our place in semifinal against Romania, if the result between Spain and Russia was favorable, and it was! The energy and determination to reach the semi-finals  burned! We had just decided to beat Romania, with or without Tomori. Görbe was sick and very weak. I  was going to keep her on the bench the whole game, I thought that was impossible to her to play, but when we were below 5-2,  I just had to try. She clenched her teeth, her body was emptied of strength and energy to the end, but led the team as a queen, to Belgrade!

I was so proud and impressed of her as a captain of the team! Otherwise the defense  was just amazing, Zita (Szucsánszki), Krisztina (Triscsuk), Klára (Szekeres), Piroska (Szamoránsky) stood as  a wall! The wings  Móni (Kovacsicz) and Orsi (Vérten) had been great in attack and defense. Éva (Kiss) in the goal was fantastic, but everybody was, whether they were sitting on the bench or in the stands, we were a team that has got the victory together and everyone had their important role to play in it!

I was just so proud of them all. Was also an incredible boost to get Krisztina (Triscsuk) into the system! She sacrificed everything and worked like a slave!

The game against Russia was that it had to be, to finish it without any injuries!

I mean that  was not particularly fair when they made public the press release (about Böhn and Löke broke up), the entire Norwegian squad was already informed  about it, but for my team came as a shock  at 21.00 o’clock,  17 hours before we had to play the semifinal against them. 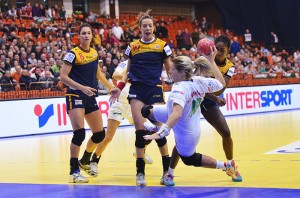 We were probably a little affected, but had anyway lost against Norway . We were in lead for 17 minutes, 9-7, but then  Norway was running over us, and we gave more or less up. I began early to think about the next match and the bronze final, perhaps looking passively and without plans, but I felt we were far away from being able to beat Norway that day.

I don’t care if we lose by 5 or 11 goals. The most  important thing that moment  was: to have players, energies and motivation to win with the bronze final the next day.

Bronze-final against hosts from Serbia showed to be tough, but we still had lots of energy and spirit in the team, and we just wanted to have the medal. Our first goal was to get to Belgrade (among the 6 best teams) but when we first came to the semi-finals, then the target revised up to the medal!

Here I just have to thank our wonderful Hungarian fans, that made Novi Sad and Belgrade to our home, they gave us  a huge support!