-How did you see this match inside the court, what were the negative and positive things in your team’s play and what should be improved until the next match? Did you like the atmosphere in the hall?

We managed to get the victory in a really difficult match. We made a good start, but we run out of elan and dynamism in the dying minutes of the first half, maybe because we missed Eduarda Amorim in defense, since she got quiet early her second two minutes suspension. In the second part of the game we build up our game cleverly, we controlled the game all the time, keeping the advantage and getting the victory.

But we have to be aware that we made many mistakes, after these turnovers, the opponent managed to score easy goals. If we make  mistakes, we had to run home and do this in an organised way.

The atmosphere in the hall was fantastic, it felt good to hear our fans, their support means a lot to us evreywhere.

-You made a very good game, you succeeded in almost everything you did in this match, how does it feels to share the victory in these conditions?

I was very happy to be able to help my team by playing good and it felt very good to be on the court. We played like a team yesterday (TOO) , and it’s superb to be  part of such a team and victory.

-Oltchim, your opponent is a really strong team. What would you do differently and what would you change to the next game against them?

We will analyse of course the mistakes we have made on this first game, and we will prepare accordingly. We will focus on our own game as we did until now in this season, this is the only way to make good results.

-Could you tell us about your coach, Ambros Martín’s philosophy, about how he prepares a match, what he considers the most important thing in a handball game? Is there something he is doing differently compared to what the team was used to before? What is your secret for beeing such strong mentally this year? 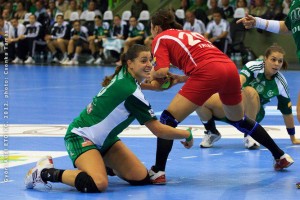 Ambros in an excellent coach, he has his methods to motivate the team and this can be observed from outside also.

As it could be seen, our game starts from defense, this is our base. If the defense is working good, than we can build up our game in attack also, we can control the game.

The team has accepted this philosophy and it is working perfectly for us. If we have a weaker day in attack, but the defense is working good, then we can rely on that and win the game anyway.

-What are you expecting from the opponent and your team in Thursday’s match?

I am expecting a highly motivated opponent, fighting until last seconds to overturn the deficit and try to qualify, but my team, Győri Audi ETO will also be on the court. I can promise that we will fight as hard as we did in every match this season and we want to play CL-final.

-What is your spot regarding the other semifinal, which team will qualify to the final, Krim or Larvik?

Honestly I was so surprised seeing the result of the other semifinal (Larvik-Krim 22-24) , that I can’t tell anything about that. It will be an exciting game for getting to the final, but I won’t pick any team, because it’s not really important for me. The most important is that ETO steps into the final.

Győr gets the victory in Bucharest against Oltchim
Bulatovic: ” We can win in Hungary”