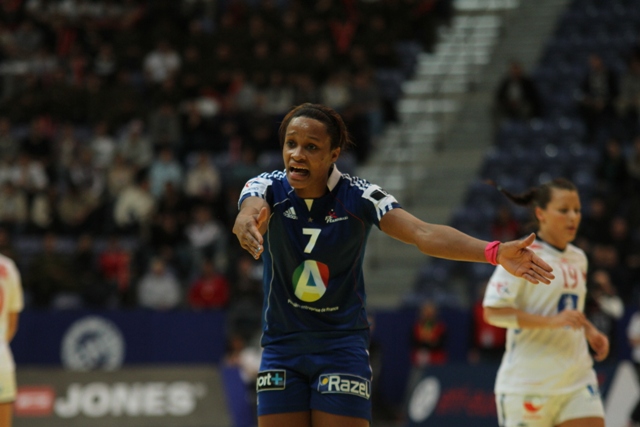 French playmaker, Allison Pineau has signed an one year agreement with the ZRK Vardar Skopje.

The 24 year old French player was on contract with Oltchim fro two years, from this season, but after the Romanian club’s financial problems, Pineau wanted to leave the club. Then she made an agreement with the leaders of Oltchim: they added a special option to her contract, so if the salaries won’t be paid punctually, she can leave the club without problems. She stayed until the CL semifinals, where Oltchim was eliminated by Győr. She left Otchim and receives medical treatments in France, for an injury on her knee, suffered last month .

Allison Pineau is the fourth member of the national team of France which has joined the Macedonian club. She followed Amandine Leynaud, Claudine Mendy and Siraba Dembéle on their way to Macedonia.

ZRK Vardar has ambitions to play in CL next season, and they strenghtened their squad, according to this: Begona Fernandez, Dragana Pecevska, Inna Suslina, Andrea Lekic, Jovanka Radicevic, Julija Nikolic will all play for the Macedonian club.