Gro Hammerseng: “I have to be sharper and use my speed…”

Gro Hammerseng: “I have to be sharper and use my speed…” 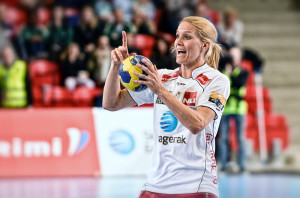 Gro Hammerseng and her team-mates from Larvik are working hard to be able to fight for the CL-trophy this weekend against Győr, in Veszprém.

Larvik HK was defeated (21-24) by Hungarians in the first leg of CL-final, played in Arena Larvik last Sunday.

” Is nothing decided yet. I don’t have yet the prescription about how to win that game, but I already made some plans in my mind. If we will play at our best level, I think it will be possible.

Larvik’s playmaker knows that victory against Krim in the second leg of the semifinal could give them confidence about how the team can play on an away court. That time they made an incredible overturn and has qualified to the final. Győr has the leading position right now, and Larvik has to play better than in the first leg of the final.

” I think that we have played a good match in defense, but we can do better. Personally I would like to show that I can play much better in attack, because the match in Larvik wasn’t my best one. I would like to make a god offensive play in Veszprém, on Saturday. I felt that I was quiet far away from my top level in that match. But it’s better to know that we have been defeated by three , and I can improve my play, so it could be only better. 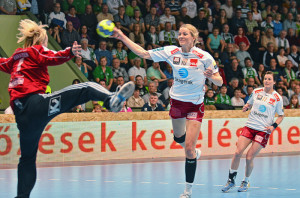 “I have to work to raise my quality of my play, because I wasn’t really satisfied with the first game. My personal mission is to be sharper and more accurate forward, both in shooting and in using my speed more on counter attacks and in the offensive phase of the game.

Team of Larvik have already analysed the first match against Győr, and they know which elements of the game was working then. It will be decisive to use more off those, because every time they found each other in clear situations , they could score. Fast breaks has also worked really well.

” In those situation when Isabel Blanco got the ball on the line, she scored, so we have to try to take advantage of these.

In all games played against Győr, the match was balanced, but we always had some periods in the game when we let them score more goals on a row. It goes without saying that we have to eliminate those dead-periods against a such a good team like Győr. This is the most important work to do now, to reduce or eliminate these periods. 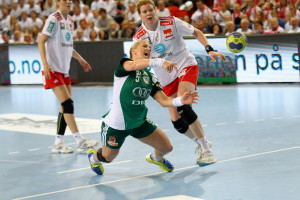 We have to hold that level we played on when we got the four goals advantage in our home-match, for example. In situations like that we have to use our experience, be cool-headed and sharp in our attack. That could be the solution to overturn the score. We have been a little bit sloppy and careless in a period, in all three games against Győr this season.

Number ten from Larvik hopes that her team learned from previous matches mistakes against Győr and they will manage to avoid these: –

“If we get in this situation again, we just have tighten it even further and dare to believe that the good situations has given goal will continue to do so.

” It will be exciting. We are lucky to have been able to play the final of the Champions League, so we should enjoy it and be tough at the same time, says Gro Hammerseng.