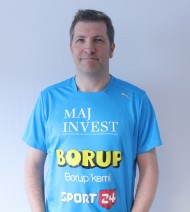 Christian Dalmose came to Viborg four weeks before the end of season, to lead the team into the Danish Championship finals.

He took over after Icelander, Oskar Bjarni Oskarsson on the bench. Reaching the final was too much, but Viborg managed to win the bronze medals, against Randers HK.

Christian Dalmose had already signed a 2 years contract from the next season with Vendsyssel , but he got a tempting offer from Viborg as well.

Vendsyssel was not happy with losing their coach, but they will get some economical compensation letting Dalmose leave.

From next season Viborg  HK has a new head-coach, he is the fourth coach on the bench in the last 12 months and he signed for 2 years.

Viborg HK intending to apply for the wildcard to be able to participate in the CL next season.

Another new from the club that club-director Peter Cassøe will leave the club at the end of this year (31.12.2013). The chairman means that the club needs a new leader with new visions.