Fabiana “Dara”Diniz: “I want Hypo back to the elite of handball”

Fabiana “Dara”Diniz: “I want Hypo back to the elite of handball” 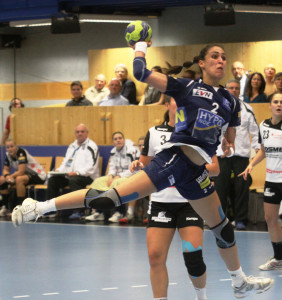 Next Monday Austrian champions HYPO NÖ will start their preparation for the new season. One part of the players will start trainings in Südstadt, lead by assistant-coach Ferenc Kovács, while the eight Brazilians will prepare in their native country under supervision of head-coach Morten Soubak.

HYPO NÖ´s lineplayer, Fabiana “Dara” Diniz gave us a summary about last season and she also talks about the goals of upcoming season and about her life in Austria.

-Decade ago Hypo NÖ has been among the strongest teams in Europe. In which category would you list your team in this season?

Hypo NÖ has always been a team of great respect in Europe and has always been ranked among the best clubs. Last year the team failed to get back to the elite in the Champions League, but we managed to win the Cup Winners’ Cup. Winning a trophy always shows a development.

I believe that this year, Hypo can go a little further, and can qualify to the Main Round in CL.

-What do you consider as the biggest weakness of the team in the previous season?
In my opinion the biggest problem was that we did not have enough players in our squad, and it was difficult to train, and sometimes players got very exhausted, playing match after match without changes and resting.

We have worked hard both physically and tactically, but we had some barriers. I still believe that András Németh have done an admirable work with the team.

– How your team will prepare this summer, for the next season?

We will have a very strong physical preparation and we will work to build together a winning team. We can count on more players than last year , some experienced players also returns to the club -these facts will make more easier Morten Soubak’s work.

– Since 2012 you are a Hypo-player. Have you and your Brazilian team-mates experienced difficulties adapting to the Austrian lifestyle?

Personally I am struggling with the German language, this year I had unfortunately little opportunity to study German and my level of English is not satisfying. I’ve got help from my teammates, Steffi (Steffi Kaiser), Ale (Alexandra Nascimento), Fe (Fernanda Franca Da Silva).

I enjoy Austria, it is a great country to live in, but I need to learn the language to be able to enjoy it even more.

Inside the team the advantage of having many Brazilians makes things easier, but it’s always useful to know the language of the country you live in in order to keep the communication with the locals ongoing.

– The head-coach of the Brazilian women national team Morten Soubak is replacing András Németh at the coaching position. Should this be considered as an advantage since Hypo’s squad is composed mostly of Brazilian national team players?

Morten Soubak is a coach who already earned respect in the world of handball with team of Brazil. The fact that the team is composed mostly of Brazilians will make the work much easier for everyone.

I believe that Morten will succeed with Hypo like he did with Brazil, but it’s important to remember that every kind of change needs time to settle and to achieve the best results.

– What are your goals in the new season?

I want Hypo NÖ to qualify to the top eight in Europe, being among the best teams again would be  primary. I would also like to get a great result with Brazil at the World Championships in Serbia. Hard work will be needed to achieve these goals.

The interview was realized with help of Márk Hegedűs (Hypo NÖ)