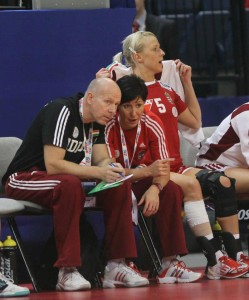 Hungary’s head-coach, the Norwegian Karl Erik Böhn is struggling with a serious illness. He was diagnosed with acute leukemia in January 2013, than had to go through four chemotherapy treatments, he was in artificial coma for three weeks and now he is waiting for a bone marrow transplantation, while he is getting a new chemotherapy- treatment at the hospital in Tönsberg.

Hungarian Handball Federation has waited quiet long in order to choose a new, interim head-coach, they had a hope that Böhn will be able to return to work and to lead his team at WCh in Serbia, in December.

In June 2013, Böhn left the hospital, but he stated that is impossible that he will be able to work this year, since the physical recovery and the transplantation will take time.

On Tuesday, the Hungarian Handball Federation has announced that coach János Hajdu will replace Karl Erik Böhn in the head-coach position of Hungarian national team, and his contract is valid until 31 December 2013.  Beáta Siti will continue the work as assistant coach, Norwegians, Tord Ellingsen as physical coach and Andreas Smeby as video-analyst.

János Hajdu had earlier worked as an interim head-coach for Hungary (both women and men team), in 2008 he lead Hungarian women national team through qualification to the OG, and in Bejing Hungary managed to qualify to the Olympic semifinals, taking the fourth place.

Hungarian Handball Federation hopes that Karl Erik Böhn will be able to return as head-coach of Hungary after he recovers from his illness. The head-coach position will be reassessed in January 2014, depending on Böhn’s health status and the result Hungary will achieve at World Championship in Serbia.

“Although we are in daily contact I would like to wish a quick recovery to Karl Erik Böhn.

I am very glad that the presidency of the Hungarian Handball Federation is trusting me and I can continue the work beside the Hungarian national team. This is a very positive feed-back for me and it also an appreciation to our work in the last two years.

I totally believe in the new conception we settled together with KEB since 2011, and I am pleased with this decision regarding the new head-coach, János Hajdu.

Personally I know him for many years and I am convinced that he is the right person, who will support the work we started and will help the team to go further on the way which leads to success.”

Load More... Follow on Instagram
Fabiana “Dara”Diniz: “I want Hypo back to the elite of handball”
WRHL with Champions League top teams