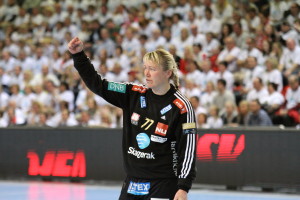 Larvik HK’s goalkeeper, 38 years old Cecilie Leganger has been injured in the first Champions League match of the season 2013/2014 against Podravka.

Leganger’s injury happened in the first half of the match against the Croatian champions, when after a save she felt pain in her left Achilles-tendon. She could not continue in the second half, and the young Alma Hasanic had to play on the goalkeeper position.

‘” I knew that my Achilles-tendon could had been ripped when I saved a ball after a breakthrough of opponents left back. This happened after ten minutes played in the match, but I only felt in the pause of the match that something is really wrong, since my foot froze completely. Today I started to use crutches ” – Cecilie Leganger said next day after the match.

The goalkeeper was examined by the doctor of the team, and the diagnosis is partially rupture of the Achilles tendon in her left foot. After earlier experiences in this area, the complete recovery could take 18 weeks, but no surgery will be needed.

” The best my teammates can do, to fight as they did in the match against Podravka. I can take responsibility to be the cheerleader in this period, and looking forward to be able to make a comeback in the Main Round, perhaps in February-March.”- Leganger said.

Other veteran of the goalkeeper position, Danish Lene Rantala will be back soon to the court, after a long recovery period, because an injury suffered right before the CL-final in Veszprém.

The challenge is big for Alma Hasanic, the 24 years old keeper has arrived to Larvik this summer, taking a brave decision to be the third keeper at the Champions League runner up, but right now she had the chance to lot of playing time in CL.

Other major  injuries or pregnancy at the CL-participants:

-Nadja Nadgornaja-leftback at Thüringer HC, fracture of right hand, out for 3-4 months

-Jelena Grubisic-goalkeeper at Krim Ljubljana, knee surgery, out until January 2014

Load More... Follow on Instagram
The CL-show goes on with surprises
Nora Mørk and Larvik takes one point from Skopje