Novi Sad: battles for the quarter-finals, Germany on track

Novi Sad: battles for the quarter-finals, Germany on track 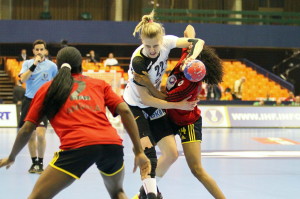 The first eight-final of the day is organized in Novi Sad, SPENS arena between Germany and Angola.

Before the match Germany seemed to be a clear favorite of this duel, but in the first twenty minutes of the first half Heine Jensen’s team had a difficult time to stop the fast and dynamical African girls and to put the ball in the goal behind Almeida.

Best scorers of the first half were: Laura Steinbach and Anja Althaus from Germany and Marcelina Kiala from Angola’s side.

The second half  started with German goals from Laura Steinbach, Susan Müller and Angie Geschke, 17 – 11 after four minutes, 19-13 in minute 42. Angola was sruggeling to score, after one quarter played Angola managed to put the ball only twice behind Woltering,  21 – 13.

Load More... Follow on Instagram
Schedule of eight-finals at WCh2013 in Serbia
Belgrade: France in the quarter-finals