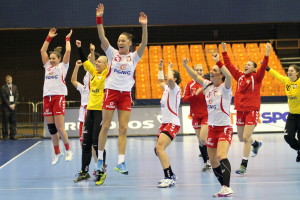 The third eight-final match is played between Romania and Poland, the team qualified from their battle will meet France,which has  already earned a berth in the quarter finals.

The match started with a high tempo, where fifteen goals were scored in twelve minutes, 7-8 for Romania. Poland was following Tadici’s team closely, 7-9  after 16 minutes. Polish team managed to score from wings meanwhile Romanians were scoring from distance by an outstanding Cristina Neagu or Valentina Ardean Elisei.

Paula Ungureanu had a weak day in the Romanian goal, she was replaced by Talida Tolnai after 12 minutes, Poland’s goalkeepers were not saving  to many balls either, Anna Wysokinska were replaced by Malgorzata Gapska.

Romania managed to take a three- four goals lead and to keep it, until the end of the first half, 13 – 17.

Best scorers of the first half: Cristina Neagu  with six goals. 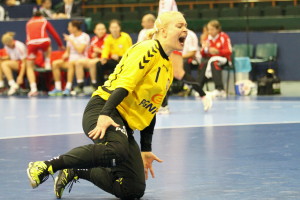 In the second part of the game Poland managed to reduce the gap to two goals more times, and eight minutes before the end teh team lead by Danish coach, Kim Rasmussen, has scored for 25 – 26.

Gheorghe Tadici has called a  timeout to calm-down his team, but goalkeeper Malgorzata Gapska saved the Romanian attack and Karolina Kudlacz got the draw for Polish team.

Alina Wojtas scored to put her team in lead, 27-26, five minutes before the end. Patrycja Kulwinska increased the lead from the lineplayer position, 28-26,  then 29-26 after Karolina Olchawa-Semeniuk’s penalty.

Romania managed to reduce the gap through the same Cristina  Neagu, from seven meter penalty, but Polish defense worked quite well in the dying minutes of the match, then Kim Rasmussen called his last timeout half minute before the end, and  Poland has qualified to the quarter-finals, producing one of the first surprises here at the WCh.

Heine Jensen and Laura Steinbach ready for quarter finals
Kim Rasmussen: “All the way I believed in victory and in my team”