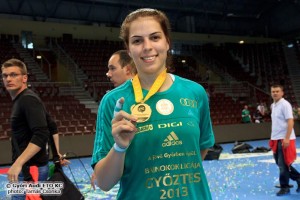 Head-coach, János Hajdu has announced that one player will be replaced before the eight-final match: left winger Melinda Vincze will be replaced by Anikó Kovacsics, who can play on every backplayer position and on left wing as well.

The young playmaker from Győr, can be an efficine option in defense as well.

Follow on Instagram
Denmark to the quarter-finals, Montenegro finished the competition
Hungary crushed Spain and qualifies to the quarter finals