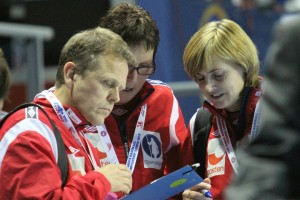 Hosts from Serbia has qualified to the quarterfinals, defeating South Korea in a thriller, where Jelena Eric has scored in the dying seconds of the match, pushing her team to the next stage.

“I expect a really tough game against the best team in the world. The key of victory against such team, should be a good working defense, as always, which should be a good base for an effective offensive play. We are not allowed to loose the ball easily, or make mistakes, since they are extremly dangerous on fast counter attacks, in the second wave.

We have to play a smart game in attack and be united and agressive in the defense.

Norway is a quiet experienced team, which has played many finals of ECh, WCh and Olympics in the last years, and I think that we are lucky to play against them in the quartefinals and not in the final. My team is prepared for this battle, every player is ready and we are looking forward to the game” 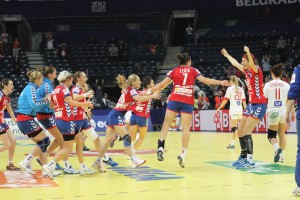 ” Our team has worked hard and I believe that we could be able to defeat Norway.

Every our of workouts and trainings should be important in this match, which could be calles also the game of our career.

We want always to perform better than we did yesterday, that is why we are working for.”

Norwegian players are prepared to play in a full hall, in Kombank Arena where more thousands of Serbian fans will support the hosts. Laser-lights were used by the auddience when Serbia has played against South Korea, tin order to confuse the players, but Nora Mork is not scared.

“They can do whatever they want, we are prepared to this match, to win that, we have a good team and the match will be decided on the court. We had already changed hotel, maybe they are trying to  make us confused, to lost our focus, I have experienced that before.”

Sasha Boskovic has pulled the shirt of Linn Jorum Sulland, during the match Serbia-Norway, without any consecvencies, and Sulland sayas, that she is prepared for everything, and that she will act different this time.