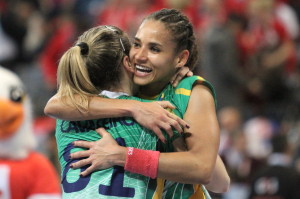 Is the big day of the semifinals in Belgrad, where hosts from Serbia will meet the surprise-team called Poland and Jan Pytlick with Denmark will try to get a place in the final against Brazil and Morten Soubak.

Three Danish coaches in this two semifinals are leading thre  different teams of three different countries, and first time in the history of Brazilian handball the national team is in a semifial of a big competition. 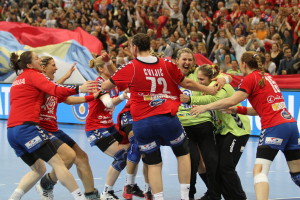 Serbian team has qualified in the final four after last year they managed to reach also  the semifinals of the ECh they hosted, and these to results achieved are one of the biggest successes of the Serbian hanndball. Andrea Lekic and company are dreaming about gold here, and they had the chance to get it.

Poland made it to the semifinals, in a spectacular way, eliminating Romania and Gheorghe Tadici and France with Alain Porter. Danish coach, Kim Rasmussen are working with the team three years now, and he made a respectfull job with Kinga Byzdra and the other players.

Denmark are buliding a young team in the last years, and the team led by Jan Pytlick has grown a lot, last year got teh fifth place at the ECh, now they ar in semis, their target is to get a medal next year at the ECh organized by Denmark.

Timeoutmagazin predicts that Serbia and Denmark will qualify to the finals of the WCh here in Belgrade, so let us see the matches!!!!!