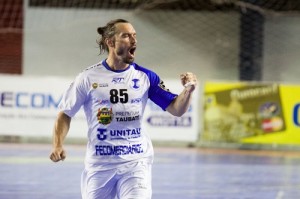 After 60 minutes of intensive battle in Anápolis, TCC/Unitau/Fecomerciários/Tarumã/Taubaté is the new Brazilian Men’s National Legue Champion. A title that came only in the last second when Fábio Vanini scored a seven-metre shot crowned a victorious year of the team. They won the Pan-American Championship earlier this year and ended up with the silver medal in São Paulo State Championship.

Metodista/São Bernardo/BESNI had a better start in the final, opening a five-goal lead (11-6) and looked like they were going to win the game without bigger difficulties. They proved wrong however after the 15th minute when Taubaté changed its defensive system from 6-0 to 5-1. This brought the São Bernardo based team a lot of difficulties to organize their plays. The ball was getting to the wings as expected.

The first half ended up with Metodista just one goal ahead, 15-14. In the very first minutes of the second half, Taubaté already took the lead with a fast and agressive sequence of attacks. Coach José Ronaldo called a time out to organize the defense. But it did not bring the expected result as Taubaté continue to score and stay in the lead. Even when they were short handed due to a red card, the game did not change its pace.

The last ten minutes were thrilling. Goals were scored in both sizes and it was tied many times, Metodista clearly saw that if they did not act fast, they would loose the game by far. Taubaté had very experienced players who knew exactly who they were playing against. The game was heading into the extra time when a seven-metre shot was called for Taubaté with one second remaining. It was up to right wing Fábio Vanini to score or they would play another ten minutes. He made it and the championship was there.

“It is a sweet emotion. I have played for four teams in my career and I won the League in all of them. We were very brave. We knew that it was going to be tough but since the beginning we kept in mind that it was our game. I will never forget this title” said Maik dos Santos, elected Best Goalkeeper of the League. “I would like to congratulate Michael (Taubaté’s replacing goalkeeper) he played wonderfully and showed that a team can not rely on a single player for the position. I also thank the whole group, they worked really hard on this, especially Thiago (playmaker) who played injured and helped us out a lot”, added Maik.