Born in the city of Niterói (State of Rio de Janeiro), Diogo Hubner started his career in Handball in his home city. He currently plays for Metodista/São Bernardo/BESNI, 2013 São Paulo State Champions and 2013 National League Runners up. For many times he was the Player of the Match including the State Championship Final (photo) and more to come. Diogo has been playing for Brazil National Team since 1999, MVP of the South American Championship twice and played in three World Championships. He just came back from Spain where Brazil won the silver medal in Domingo Bárcenas Tournament beating Olympic silver medalist Sweden. Diogo talked about his career and shared his thoughts. 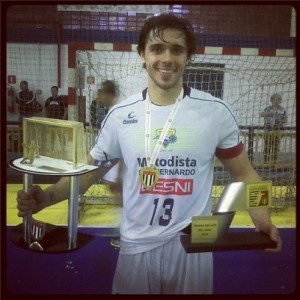 For those who might not know you, could you please introduce yourself?

My name is Diogo Hubner, I am 30 years old and I have been playing Handball professionally since 15 years ago. I started playing when I was 9 and like most of the players I know, I started in school. I have played for three clubs: Niterói Rugby, CR Vasco da Gama (both from State of Rio de Janeiro) and Metodista/São Bernardo/BESNI (State of São Paulo) for which I have been playing for 12 years.

Could you tell us two remarkable moments of your career?

I can say the 2003 Junior World Championship and my first time in the Brazil MNT in 2005 are moments I’ll never forget.

This season Metodista won two championships and finished two others with a medal. What is the strength of this group in your opinion?

The team work. This group has been playing together since four years ago and everybody knows each other very well. Even though we had a difficult year due to injuries and transfers we managed to get every single player focused on the team and keep our competitive spirit alive. This is what makes us such a strong team.

Which European athlete do you have as a reference and for which club from there would you like to play?

There are many good players I have played with and admire. I believe that Rutenka, for his offensive effectiveness and Karabatic, for being such a complete player are my references. I also name Ivano Balic who has been awarded World’s Best Player. To play for a strong European club like THW Kiel, FC Barcelona, Flensburg or Kolding Copenhagen would be a dream.

How do you see Brazil Men National Team in a year time?

I believe we can make a big surprise. We have a lot of players in the Spanish Asobal League and this is very important for upcoming competitions. We also have young talents who are proving their value along with more experienced athletes. This mixture between youth and experience can be very benefit to achieve a good result.

Do you believe that the World Championship title won by Brazil Women National Team can bring significant changes for the National League?

It is what we expect. I hope this title can be a big step of your sport. Investments in your national competition is what we need the most right now. Our clubs are facing a difficult situation and they are in great need of attention. We need more clubs with a nice infrastructure in order to make Handball once and for all a professional sport in Brazil.

You played in the 2012 IHF Super Globe in Qatar. What can you tell us about that experience?

It is always very exciting to play against the bests of the world. We played against different schools. Competitiveness is very high and it is the only way to have progress, competing against the best.