Ambros Martín, best coach of the world in 2013 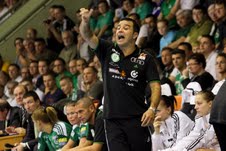 Ambros Martín, best coach of the world in 2013

The World’s Best Coach in Women’s Handball in 2013 is Spanish coach, Ambros Martin. The Spanish coach build a competitive team, with an amazing defense in Győr, and with his arrival the Hungarian team showed a totally different mentality on the court throughout the whole season 2012/2013, which at the end has culminated with the winning of the CL-trophy.

Ambros Martín is known to be able to build teams by players, not necessary top-class players, but in Győr he had almost on every position a world-class player. But he’s strongest side is known being able to use every player of a team in a way that every player can add an important contribution to its team’s performance and he transmits an unbelievable winner mentality spiced with a huge amount of self-confidence.

Győr’s head-coach has got the highest number of points/votes by the 12 members of Jury (handball journalists, among them our colleagues Björn Kenneth Muggerud and Márk Hegedűs) and the fans of handball-planet.com

The second place was taken by the head- coach of Brazil, Danish Morten Soubak, who won the gold at WCh 2013 in Serbia last December with Brazil, while on third place has finished the head-coach of Poland, Danish Kim Rasmussen, who led back Polish women handball in th elite of the world, finishing on the fourth place at WCh 2013 in Serbia.

Løke, Görbicz, Lunde on the podium
Transfer news from Europe