Martin, Torstenson and Vizitiu released of their contracts with Krim

Martin, Torstenson and Vizitiu released of their contracts with Krim 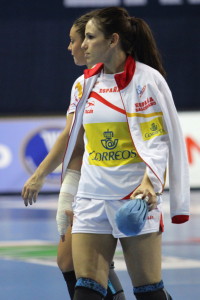 According to Slovenian press information, Krim Ljubljana is struggeling with economical problems and has fired three of the club’s foreign players, right before the start of the Champions League Main Rounds.

Spanish right wing, Carmen Martin is no longer a Krim player. The reason of that she has to leave the club is that she has too high salary and she was injured for too long periods lately. Carmen Martin has became injured in last season at her right shoulder, and after a surgery she was just done with the long recovery period in December. The club, Krim has warned Martin to not participate at the WCh with Spain to not risk another injury. Unlucky Martin has been injured again in the opening match of her team, against Norway, the diagnosis was a fracture in her hand, with a recovery estimated to three months.

The second player who has to leave Krim is Romanian rightback, Patricia Vizitiu. She was transfered at the beginning of this season from Üsküdar, but she had not had a main role in the team. The reasons indicated by the club for her firing is that she has a weak performance and she don’t prepare properly.

The third player who will leave the club is Swedish leftback, Linnea Torstenson, with the arguments that she has a weak performance and a bad health-status. Gossips tells that Torstenson might end up in Denmark again (she has already played in the Danish league before – two years in Aalborg DH and 2 years in FCM), this time Viborg HK could be her new club.