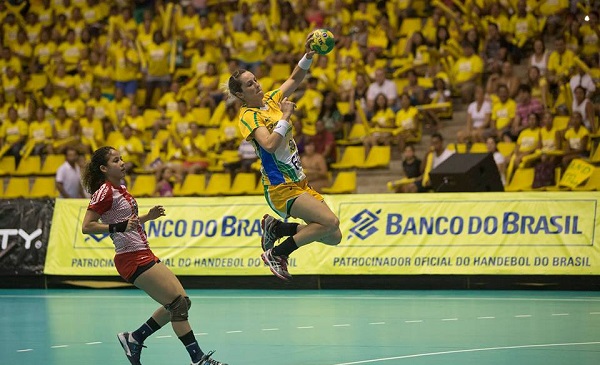 An afternoon Brazilian fans will remember for a long time. The party that has started in Serbia with the world title continued last week in the city of São Bernardo do Campo. Brazil Women’s National Team took on Dominican Republic for the first time in front of its fans as world champion. And even though there was only four players that beat the Serbians in December, everyone had plenty of reasons to celebrate. Furthermore, they were very motivated to keep working and play this match.

The twenty players called by Alex Aprile, assistant coach of Morten Soubak who is in Europe with Hypo. They had a week of trainings and made visits to Correios (Brazil Handball’s key sponsor) and development centers as well. A work that aims continuity in the team, in order to make sure the next people that pull on the green and yellow are as talented or even more talented than the ones who lifted the trophy. The Olympic Games on home soil are coming up and the medal has never seemed so close until now.

Before the game against the Center American team on Sunday there was an act to honor the champions. Mayara Moura, Elaine Gomes, Amanda Andrade and Déborah Hannah showed the trophy and the gold medals to the crowd who responded with a huge celebration. And to make the party complete Brazil also won the match, 38-19, controlling the actions, defending very strongly and scoring goals with a productive attack.

“I believe we played a good match and we did what we worked for the whole week. Everybody showed tremendous dedication to this and I congratulate the whole squad” said playmaker Patrícia Matieli.

According to her, being a part of this phase was a huge gain. “I didn’t have the opportunity to play in Serbia however, like most of us, I felt like I was there. After pulling on this jersey and listening to this crowd, I realize how much this title contributed to our Handball and this is very rewarding”.

But this match was a useful experience not only to the Brazilians, as Dominican Debora Torreira described. “We stayed a month without playing due to vacation. Now we are preparing for the Center American Championship and thanks to today we are able to identify aspects to be improved. Coming over was necessary and very helpful as we just saw”.

The high point of the weekend was the big number of fans who came from numerous cities to watch the team. For the athletes this brings a great deal of help and motivation. Some time ago this was very unusual due to the extreme and exclusive attention Football gets in the country.

“Fans were great and always cheering for us. They brought us liveliness and it is always special to play in front of them” said wing Célia Costa (photo).

“For us it is an immense joy to see this arena very crowded and kids rooting for us. I do believe that some of them are actually dreaming of making to this team thus becoming world champions. For me, being a part of this team is an honor I can’t describe” told playmaker Isabella Ansolin.

Born and living in Minas Gerais State, Ligia Pacifico and Camille Britto travelled six hours by car from Três Pontas to São Bernardo do Campo for the match. According to Ligia this was very woth it.

“Camille is a huge fan of Déborah Hannah and her dream of meeting her came true. As for me, I still can’t believe that I saw the girls right in front of me. Without any doubt I can say that coming over was the right thing to do”, said Ligia.