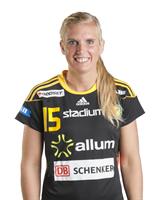 IK Savehof started strong the match against big favourite, Vardar. and took the control over the game right from the start with a convincing 3-0. The result was 6-2. 11-7, 12-8 for the hosts, with substantial contribution of Swedish goalkeeper Filippa Idéhn and leftback Jenny Alm, scoring easily against a nonexistent Macedonian defense. Vardar managed to fight back and in minute 23 the score became 12-12. Then teams was fighting and result before the break was 15 – 15.

In the second half hosts started again with a 3-0, and they were leading during the first twenty minutes of the second half (20-17, 23-20, 23-229, than Vardar equalized at 23-23, but Ida Odén and Jenny Alm took back the lead, 26-24 (54.min). Vardar and Tatiana Khmirova managed to get the draw 26-26, and even to take the lead by Andrea Lekic one minute before the final, but Jenny Alm scored from seven meter, and the young but ambitious Savehof managed to keep one point home in this thrilling game.