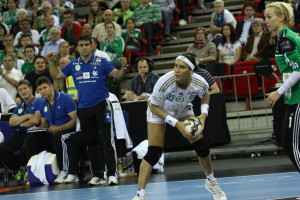 ” It was a fantastic feeling to play for ten thousand people, they gave us a lot of power with their great support. We made a fantastic first half, then we had a weaker period, but our strenghth as a team helped to get through this, to keep fighting and qualify to the final of CL.

Tomorrow will be a new match, no matter who the opponent will be, the most importnat issue will be to win the game, to stay together as a team and stay focused all the way”

Heidi Löke (Győr) – her fourth (!) CL-final in a row (one with Larvik HK and third with Győr)

“We made a really good game, we had to fight against a strong opponent, and our first half was fantastic, having a very efficient and clever offensive play and a strong defense. But then we had a bad period and FCM made a strong come back. We still managed to win the game, and now we are ready for the final tomorrow. I am very proud being in my fourth CL-final, and of course I would like to lift the trophy again.”

Katrine Lunde(Győr)-fifth time in a CL-final (two with Viborg, three with Győr)

“I am really happy to be able to qualify to the final again with very good first half. We played united, stayed focused, but I am not satisfied with my performance, hope to be better in the final tomorrow.
The ther semifinal is very open, both teams has the chance to got in the final. I don’t have no preferencies,I hope both teams will havean exhausting match before the final.”

Ambros Martín (Győr)-head coach- his third CL-final as a coach (one with Itxako, two with Győr)

“We have prepared during the whole year both mentally and phisically to win games like this, and even it was an expectation to go to the final today. The athmosphere was a fantastic one in the arena, I really regret that I am not a player anymore, because it is a unique feeling to play for so many people.

We would like to win tomorrow of course, that is the most important now”

“Győr is a really good team, so could not manage to go the final, but the athmosphere here in the arena was fantastic, I am happy to be part of this event, still sad of course.
Hope that Buducnost goes to the final, because of my German colleague, Clara Woltering.”

” The team of Győr has defeated us because they are a much better team. No further comments.”

Győr pushed by FCM, but made it to the final
Buducnost in the final after extra times